To the left of the Statue of Sean Russell you can peruse the Blacksmiths Forge, featuring an incredible array of all the old tools that were used way back in bygone times, and within this vast collection you will see many tools that are now a forgotten part of the old way of life when everything had to be done by hand.

There is, however, two very large old bellows inside which are particularly significant – one is the bellow that was in Coffey’s Forge in Solougheadbeg the day the Irish War of Independence commenced, and the story is that Dan Breen and Sean Treacy et al gathered around it awaiting the arrival of the R.I.C., who were transporting gelignite to the quarry.

The second bellow was the one used in the filming of the movie Excalibur. Much of this film was shot at the Rock of Cashel and Cahir Castle, featuring Liam Neeson, Gabriel Byrne, Helen Mirren, and many others who would go on to enjoy stellar acting careers. The film was the brainchild of John Boorman, who lives in Annamone in Wicklow. John himself has also enjoyed an incredibly successful career in the movie industry as a major producer/director of high quality films. 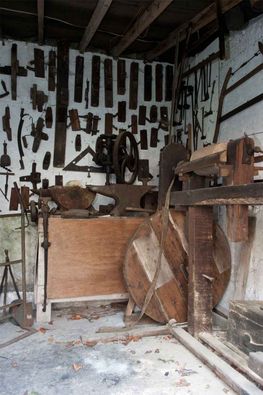 The Blacksmiths Forge features an array of historic tools representing a forgotten way of life. For more information please contact us.