In front of your eyes, as you exit the Penal Chapel, you are now gazing into the monumental 1916 Garden of Remembrance /Memorial Plaza. This is certainly one of the real highlights of our entire historic collection, and many of these original monuments are here onsite due to the generosity of the National Graves Association of Ireland and the great relationship they enjoyed with Martin O Dwyer, founder of, and inspiration behind, Cashel Folk Village.

The following is a detailed account of everything contained within the Garden/Plaza area.

This imposing monument, dedicated to the memory of Sean Russell, was originally built in Fairview, Dublin as that is where Sean was born. Sean fought in the Easter Rising in Dublin under the command of Commandant Tomas MacDonagh. Tomas was from Cloughjordan, in Co. Tipperary, and was the only Tipperary-man to be one of the Seven Signatories of The Proclamation of Irish Independence. We now have a heritage centre in Cloughjordan that was built in honour of Tomas, and the important role he played in attempting to bring about Irish independence, a cause he bravely and fearlessly forfeited his own life for in the hope that others would subsequently achieve that goal. Sean Russell himself was a prominent figure in the struggle for Irish independence during the Easter Rising/War of Independence period and in subsequent periods. He became, in later years, the head of the Irish Republican Army.

In 1939 on a mission to America, and later to Germany, he took ill on a German vessel when returning to Ireland. He died on-board the German vessel on the west coast of Ireland, and was buried at sea. A number of years later, a monument commemorating his memory, and his service to Ireland, was built in Fairview in Dublin. In more recent times this statue was, sadly, vandalised – the head was cut off, the arms were cut off, and graffiti was painted on it. Thankfully, the National Graves Association of Ireland built a new bronze statue in Fairview, and very kindly donated the original monument to Cashel Folk Village. As the original head of the statue was never recovered, we have had a new head sculpted on the original monument. 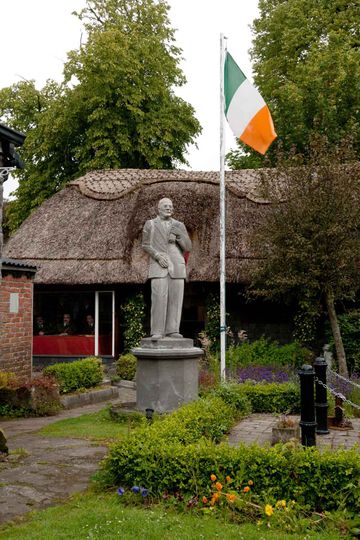 Almost directly behind the Sean Russell Monument, you will see, floating in the breeze, the National Flag of Ireland, which will always be synonymous with famed Irishman Thomas Francis Meagher, often simply referred to as Meagher of the Sword.

The flag originated in France, as it was given as a present to members of the Young Ireland Famine Rebellion. The members concerned had travelled to France in the 1840s to congratulate the French people on achieving freedom, and to also get an insight into the methods used to achieve success. It was subsequently hoisted in Meagher’s home city of Waterford for the first time, but was not recognised as the national flag at that time. In 1916 it was erected on top of the G.P.O. during the Easter Rising, while not very far away from it you also had what was the officially recognised national flag also erected. It was only after the Irish Free State was founded that the green, white, and gold became the official national flag. Incidentally, for those who may not be already aware, the green represents the Catholic or Republican side, the orange represents the Protestant or Unionist side and the white in between represents the hope for peace between both sides.

I am sure you will agree it is an aspiration that is worthy, in its symbolic meaning, of any national flag.

This beautiful, inspiring monument details, word for word, the specific aspirations of the 7 Signatories of the Proclamation. To this day, over 100 years later, it still portrays the ideals that these 7 men, and many others, were willing to sacrifice their lives for in the hope of achieving independence and civil rights for all of the men, women, and children equally in this country. It is very worthwhile to read the words of the Proclamation in its entirety.

Michael O Rahilly, best remembered in Irish history as The O’Rahilly, was one of the only senior officers killed in action during the Easter Rising. He had previously played a monumental part, which it can be truthfully said he never received anything near the level of recognition for his efforts that he was due, in the promotion, maintenance, and preservation of all things Irish. He played a major part in the foundation of the Irish Volunteers, and in the subsequent operations of its governing body. He was also a major figure in An Coiste Gnotha and its instrument of communication An Claideamh Solas, where his own personal time and money was used unsparingly to promote the Irish language, culture, the support of Irish industry and manufacturing, and most of all the right to self-determination.
Specific to his role during the Rising itself, the following is a very brief summary; The O Rahilly himself was actually against the Rising taking place, simply because he felt it would be unsuccessful and would lead to the unnecessary loss of lives. He actually travelled to Tipperary, at Eoin MacNeills behest, to try to convince the military leaders in this area not to participate in the Rising. He had returned home to Dublin after his efforts when a caller to his home informed him that the Rising was going ahead. He then supposedly said these oft quoted words “I helped to wind up the clock, so I may as well hear the bells toll.” With that, he jumped into his famous Dion Bouton car and actually transported weapons to The G.P.O. His car was subsequently used in the barricades, and is now buried under Hill 16. Ultimately, on the second last day of the Rising when the G.P.O. was on fire, The O Rahilly led a rush down Moor Street when he was fatally wounded. He died from those wounds within 24 hours.

In 1966/during the Commemorations for The 50th Anniversary of the Easter Rising and the 50th Anniversary of The O Rahillys death, the monument/plaque that is now on permanent display in Cashel Folk Village was originally erected over the spot where The O Rahilly died, and the area was renamed O Rahilly Parade in his honour. However, a number of years back this plaque was cut out from the wall where it was originally placed, and a new plaque was erected in its place. You may very well ask why? The reason is, while The O Rahilly was dying on the ground back in 1916 , he took a letter from his pocket that he had received from his son during the Rising and on the back of that letter he wrote his dying words to his wife. Those words, both heart-wrenching and inspiring, are now written on the new plaque in O Rahilly Parade, and his original plaque is on permanent display here.

We are both honoured and proud to have been the recipients of this plaque representing a truly great Irishman, and are forever grateful to the National Graves Association of Ireland for this privilege. 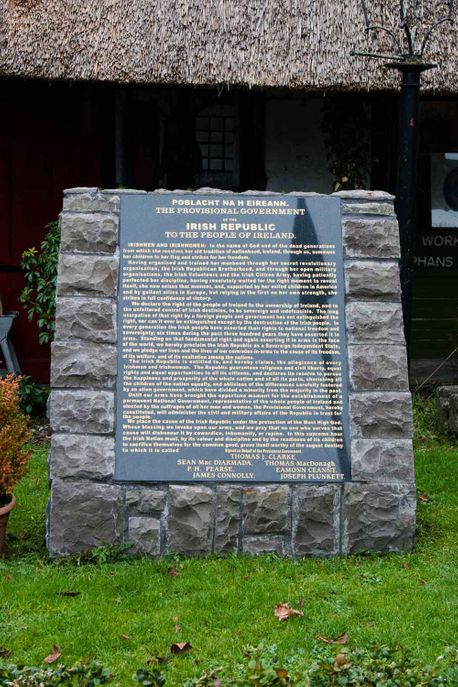 Witness historical monuments commemorating one of the most important periods in Irish history at Cashel Folk Village. Contact us for more information.